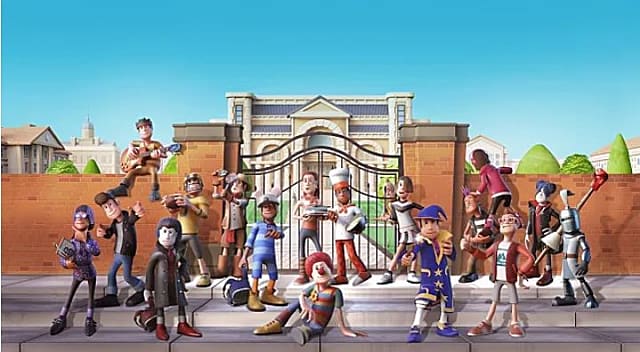 Two Point Campus is an A+ management sim that lets you build the wacky school of your dreams, then watch it run in all its glory.
by Hayes Madsen

Running a school is tough business, especially when your culinary classes are just a front for a secret spy school.Two Point Campus is a management sim where you build a flourishing university while trying to juggle a variety of kooky elements.

It feels like the perfect follow-up to 2018’s Two Point Hospital, with a zany sense of humor and strong strategy systems that make for an absolute blast. Two Point Campus gets the most important thing about management games right: it's about the big picture rather than the minutiae.

Your goal in Two Point Campus is to build the best college campus possible, all while juggling your income, student happiness, and much more. The primary portion of the game is split into a variety of different maps, all of which come with unique objectives you must complete to earn star ratings, with one star needed on each map to move to the next one. Completing all maps unlocks a sandbox mode, where you can play around to your heart’s content. It is a bit disappointing you can't jump into sandbox immediately, but there's still enough dynamic content to satisfy any player until then.

The neat thing about Two Point Campus is that each of these maps is designed around a unique college campus blueprint incrementally introducing the core mechanics of the game, slowly adding more elements as you get the hang of things. One map sees you creating the ideal sports school and challenging other universities to Cheeseball matches, while another lets you create a wizarding school, where you need to keep students happy in the midst of meteor showers and evil hexes.

There are loose goals that dictate how you build your school, but overall, it’s up to you on how things are constructed. Teachers run classrooms and provide private tutoring, assistants help run a variety of locations like libraries and food stands, and janitors work to keep the grounds clean and upgrade equipment. Once you’ve built the various university rooms and staffed them, things virtually run on their own. The core loop of Two Point Campus is much more about finding little ways to improve your overarching operation before reveling in the madness of it running. 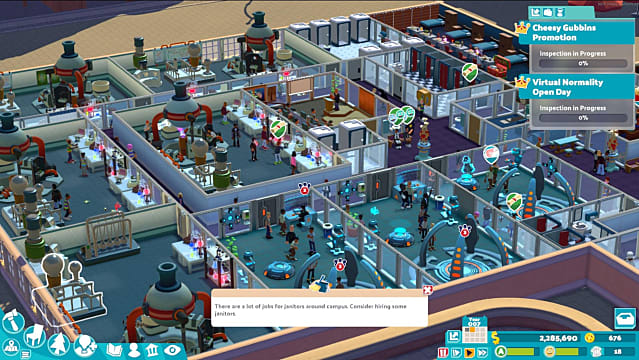 Each room on campus has a prestige level that can be improved by placing additional items in it and making it look nicer. The higher the prestige level is, the better the room will perform. There are a lot of little elements that can tie into how your campus runs, as well. You can place special club podiums around that provide student bonuses; the Speedwalking Club podium increases their overall movement speed, for example. You can also schedule parties and musical performances to confer big boosts to your student’s entertainment needs alongside other bonuses.

There's also a system called Kudosh, which is used to unlock a wealth of new items. You earn Kudosh by meeting milestones for dozens of different categories, such as providing archaeology classes or  increasing the attractiveness of your campus. These milestones apply across the whole game, not just to specific levels. While you generally have a decent income of Kudosh, it can be frustrating to get a request from a student you can't fulfill because you don't have enough of it. Still, the system does give you a secondary set of objectives to work toward.

When to it comes to making money, every student pays tuition fees that roll in each month, and you get even more money every month from the amount of XP your students earn. You’ll need to balance your income against the salaries of your employees, maintenance fees, and more. It’s a delicate balancing act that you’ll constantly need to stay on top of to keep making improvements. 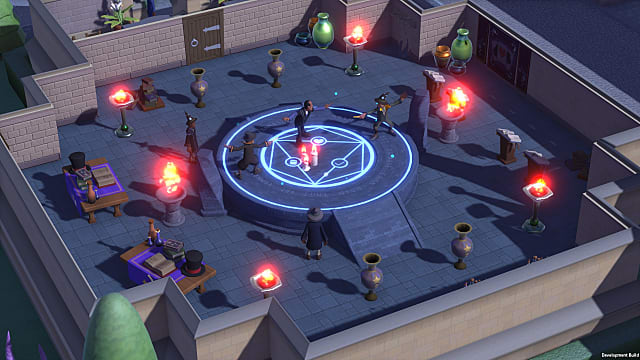 Two Point Campus features the same cartoony art style as Two Point Hospital, and one of the most fun aspects of the game is watching the whacky antics of your students and staff. Culinary students cook massive burgers the size of a small house, countercultural students swagger around in leather jackets, and wizardry students knock each other silly with spells. There’s so much personality and vibrancy crammed into every aspect that it’s simply a joy to sit back and watch the machine you’ve built run.

Two Point Campus definitely feels a lot like Two Point Hospital, and if you've sunk hundreds of hours into that game, there might be a bit of deja vu here. However, Two Point Campus really does a phenomenal job at making each campus feel unique and different, and later levels are the best. The music-focused level throws a wrench in things by not giving you any tuition money, but every time a student levels, up you get a bonus. Meanwhile, the spy school introduces another mechanic: a mole infiltrates your campus, and you need to sniff them out and expel them so they don’t drag your other students down.

It also helps that the game’s UI and interface are easy to navigate, with everything clearly separated into tabs for rooms, indoor items, and outdoor items. At least on PC, it’s incredibly easy to rotate and adjust items to place them wherever you want or even move and edit them after the fact.

Just like the previous game in the series, Two Point Campus has a phenomenal sense of humor, with tongue-in-cheek student announcements cutting in to “ask students not to ask questions,” among other chuckle-worthy things. Each map also has advisors and other characters that chime in with their own dialogue every once in a while, and it all adds to the general comedic tone.

Somehow, Two Point Campus manages to find a great middle ground between easy-to-pick-up gameplay and deep management mechanics. There’s an undeniable, joyful glee spending hours meticulously placing items, seeing it turn into a massive well-oiled university. As stressful as you might think it’d be to run a school, Two Point Campus is nothing but fun.

[Note: Sega provided the copy of Two Point Campus used for this review.]

Our Rating
9
Two Point Campus is an A+ management sim that lets you build the wacky school of your dreams, then watch it run in all its glory.