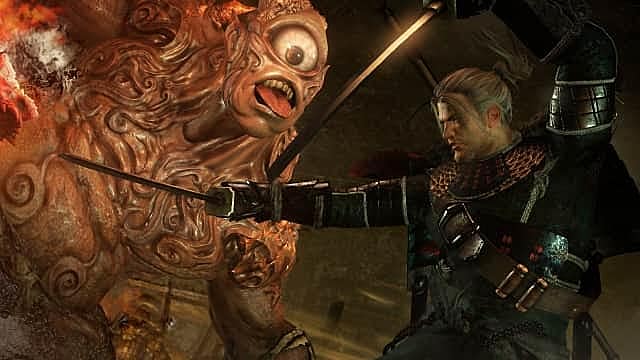 Sometimes developers decide that, "yeah, this character is going to die," in a funny way, just for the LOLs. Here are some of the most hilarious video game deaths!
by Ricardo melfi

Sometimes it's just not enough to see a certain villain or comrade die in (mostly violent) different ways. You may feel the need to see them die in hilarious and outlandish ways because of, you know, entertainment and stuff. There have even been moments where the situation is supposed to be sad or upsetting, yet the way the character dies is just too good not to laugh.

We decided to compile the very best deaths that we considered hilarious (which means they have physically and literally made us LOL). Here are our 9 Best Hilarious Video Game Deaths! 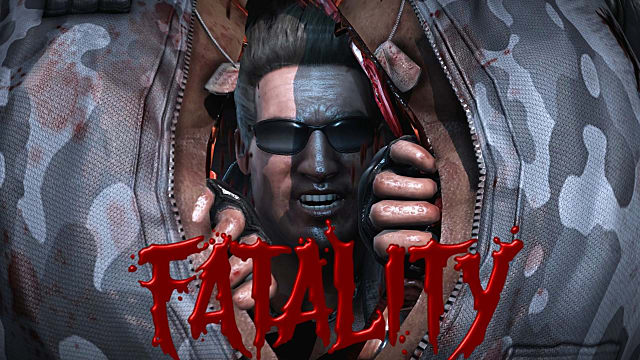 Yes, it is a surprise that Mortal Kombat features on list of hilarious video game deaths. But the crew over at MK have never really taken fatalities that seriously, which is perfect for scoring unlimited laughs.

The series veteran, Johnny Cage, is still here carving out fatalities against his unfortunate opponents. His latest one sees Johnny go up behind his beaten foe and literally open them up from the back, peering through the gaping hole in their torso. This isn't what makes it great though, as Johnny pays homage to one of my favorite movies, The Shining, by saying, "heeeeeerrreeee's Johnny!"

There's a sequence in The Amazing Spider-Man, by Activision, in which Spider-Man (Peter Parker) has to execute a string of QTEs in order to pass the scene. Not an ultimately difficult sequence to keep up with, as Spider-Man is ever graceful. However, miss just one button and Spider-Man ends up flat on his face, extremities spread out as if he was squashed like a bug.

The above video shows off all of the hilarious death animations, but the first sequence is the most funny, with another having him spread out flat after hitting a wall. Cheap laughs? Absolutely, but still hilarious...

Everyone loves Red Dead Redemption, as Rockstar absolutely nailed the harsh and untamed world of the Wild West. There are a few zany missions in this gem (that is still played today by the way) but the best one in our opinion is the Daedalus & Sons, hang glider mission. You see, Daedalus is determined to be the first man to fly using a hang glider, and is even willing to risk himself in order to prove it works... by jumping off a very high cliff.

After John has finished amassing the items that Daedalus needs and progressing to the end of the mission, we see him finally take the jump. Unfortunately, his hang glider isn't quite what he expected and he plummets to his impending doom, all the while screaming in true Rockstar fashion.

Horrifying? Maybe. Hilarious? Definitely. Rest in peace friend, the world will never know of your exploits. 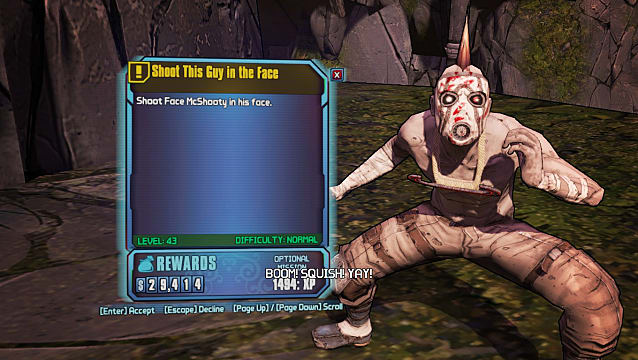 Usually when someone asks you to shoot them in the face, you consider what that could mean? The person's obviously crazy, right? So what do you do? Well, if you're playing Borderlands 2, you happen to come across Mr. McShooty who basically begs and screams for you to, erm, shoot him in the face. No sooner does he say it that a mission automatically appears instructing you to actually go through with it.

It's got to be a trick, so you wait... and wait. Once he starts to repeat himself, you think, "Why the hell not?" Now the hilarity doesn't actually stem from this moment but with the immediate, "THANK YOU!" he shouts, milliseconds AFTER being shot.... in the face. 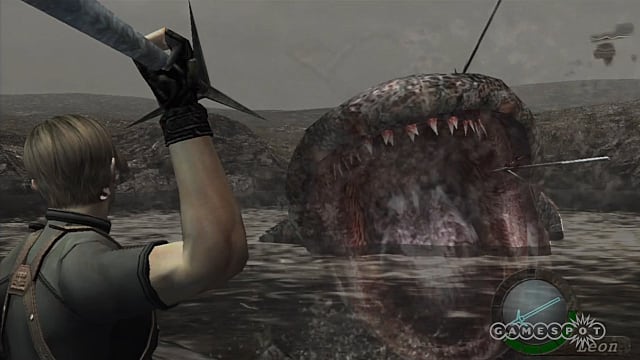 Leon Kennedy has seen some weird shit in his life when it comes to bioweapons (ahem, zombies and mutated monsters). He works hard and barely gets time off. Entering into Resident Evil 4, Leon has his work cut out for him as he has to save the president's daughter. Still, all work and no play makes Leon a dull boy, right?

Thus, we all decided to go lake fishing and started taking pot shots at the fish swimming around. It was kind of relaxing, if we're being honest. However, after taking too many pot shots at the defenseless, small fish in the lake -- found midway through RE4 -- will not end well for Leon. He thinks he can just push those fish around? Well not today!

After too many pot shots, a massive bio-weapon fish launches out and swallows Leon in one go. Yeah, that's what you get for picking on creatures smaller than you.

Carmine - Keep Your Head Down, Stupid 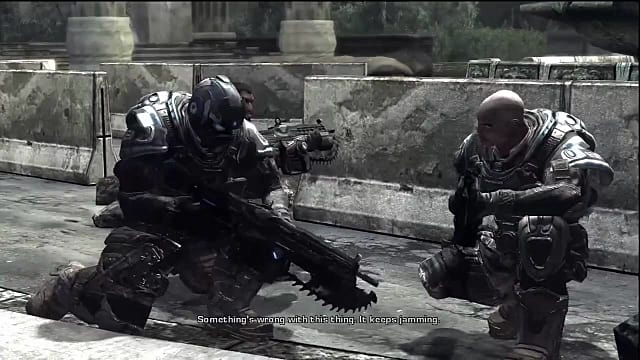 Carmine, you poor, poor rookie. We understand that you're still working out the kinks in your soldiering but just a little piece of advice for you. When it comes to being in battle zones, don't keep your head up. Stay down, at almost every opportunity, as Carmine finds out the hard way. Kneeling to fix a jam in his gun, he cops a round to the head after not staying behind cover. Tough break, man. Maybe you'll do better next play-through... oh, it's scripted.

Almost every game, ever 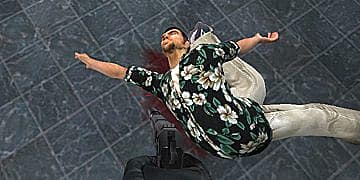 Rag doll physics are reason enough for spontaneous laughs almost every time. I'm not sure how these kinds of physics are supposed to make the game seem more realistic, but due to some of the rags we've seen over the decades, rag doll physics still haunt our darkest nightmares. Other times we lose our (collective) shit. You know what we're talking about. 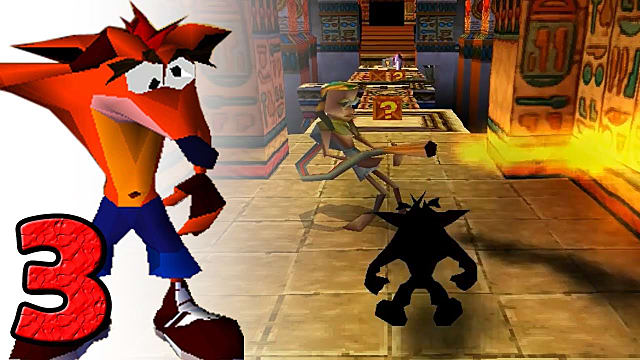 That brilliant bandicoot was the epicenter of my young, gaming life, collecting every damn box, gem, relic and crystal this series had to offer. The first installment became insanely hard the further you progressed, with punishing saves and checkpoints. This meant that you would die, a lot.

Even as a professional Crash player honing my skills over the decades, I still manage to lose a lot of damn lives towards the later half of the game. As one would expect, every one of Crash's hilarious deaths are burned into our memories. Every, single, one.

Everyone loves pop culture classics like Dracula, The Ring, Back to the Future, all of the Superheroes, Portal, and even Bill & Ted's Excellent Adventure, so it goes without saying that the (very versatile) re-spawn animations in Sunset Overdrive are a real treat.

The nods to many great films and pop culture appear and yes, we know they aren't technically 'deaths' but you do have to die in order to see them. Check mate?

Proving that not all deaths in video games have to be such serious circumstances and that laughter is good for the soul, even if it is at someone else's expense -- but they aren't real, so it's fine. But for now, that was my 9 Most Hilarious Video Game Deaths!

Did we miss anything obvious or did you find some hilarious game deaths of your own? Leave a comment below and get involved!

Hey all and welcome to my GameSkinny profile, where I write about whatever the hell I feel like! Many of my articles are in series, such as 'The Story So Far', 'If Games Were Movies', Retrospectives, Top Lists, and much, much more so feel free to browse, share my content or even just leave a comment. Looking forward to expanding my writing portfolio and making a lot of new friends here. Take care!