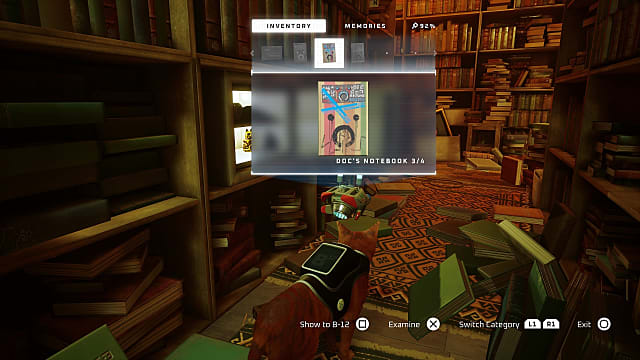 Stray: Where to Find All 4 Outsider Notebooks in The Slums for Momo

Here's how to get all four Outsider notebooks in Stray so Momo will fix the transceiver.
by Jonathan Moore

The Slums is the first inhabited location you come across in Stray. Full of tight alleyways and tall buildings, there are plenty of places for things to hide, including seven of B12's memories and eight pieces of sheet music. To progress through the chapter, however, you'll need to find four notebooks from the Outsider Companions: Momo, Clementine, Doc, and Zbaltazar. Some are hidden away cleverly.

Your primary objective when entering The Slums is to speak to the Guardian, show them the picture of the beach (Outside), and talk with Momo, who can tell you more about how to get there. Momo is in the tall building with the giant orange sign, which the Guardian points out. You can go there immediately, but if you want him to help, you'll need to show him his companions' notebooks, so you might as well collect them first.

For example, each notebook is numbered as if it were in a set X/4. Disregard the numbering conventions, though, as they can be a bit confusing. There is only one notebook from each of the Outsiders to find, and the X/4 denotes the number they are in the entire Outsider set, not a particular robot's collection.

This guide will show you their locations in the most efficient order to prevent as much backtracking as possible (though there will be a tiny bit). With that in mind, we'll go in reverse numerical order. 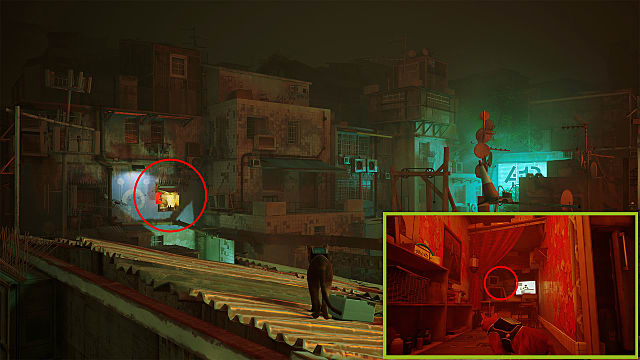 Climb to Dufer Bar's roof, and look for a blue wall with a white Outsider face logo painted on it. A red paper lantern is next to an open window bathed in yellow light. Climb inside, and head to the back through the broken panes at the bottom of the french doors. Turn right here to pick up a music sheet, then left to enter another small room with flowery wallpaper and a red light.

Turn right inside the room, and you'll see a desk in the back with three computer monitors on it. Clementine's notebook is on the monitors to the left. 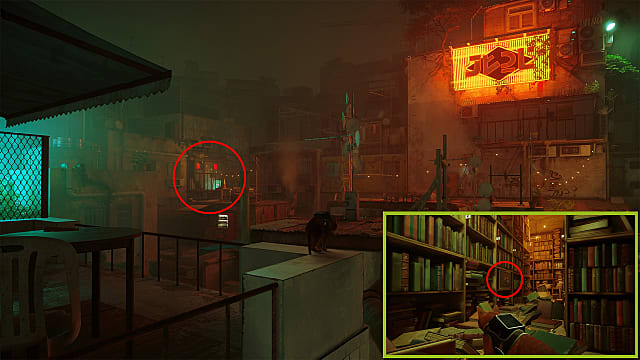 Exit the apartment where you found Clementine's notebook, and follow the pipes directly below you to the balcony on the left. Grab the music sheet off the table next to the white plastic chair, then look to your left.

You'll see another apartment on the far side of The Slums. It has two red lanterns out front, and a square, blue sign with the Outsider face logo painted on it on the balcony. There is also an orange traffic cone, couch, and television on the roof in front of the apartment.

From there, go to rows K-M in the library in the center of the apartment. You'll see a stack of books about halfway down the aisle on the left. Knock them down to reveal a safe. Use the key to unlock the safe and get Doc's notebook. 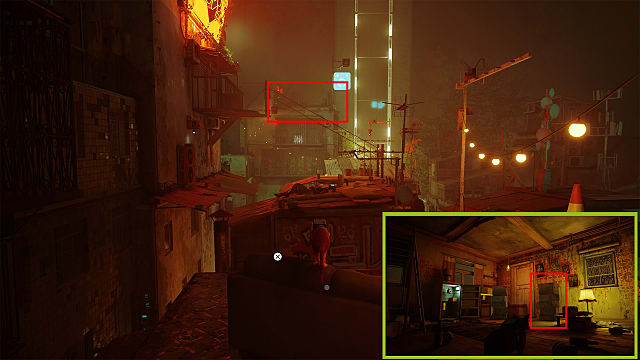 Exit the apartment where you picked up Doc's notebook, and look straight ahead, back toward the Guardian on the far side of The Slums. You'll see yet another square, blue sign with the Outsider logo hanging above a building and two more red paper lanterns. You'll pass Momo's building while heading over, but it's easier to come from this way than up from the Guardian.

Go to the roof, and remove the battery from the right side of the ventilation unit. Drop it on the ground, and climb up in the middle of the ductwork to find a fan that's stopped. Jump down through the fan, then down from the bunk bed. Knock down the stack of boxes to the right of the door to reveal Zbaltazar's notebook. 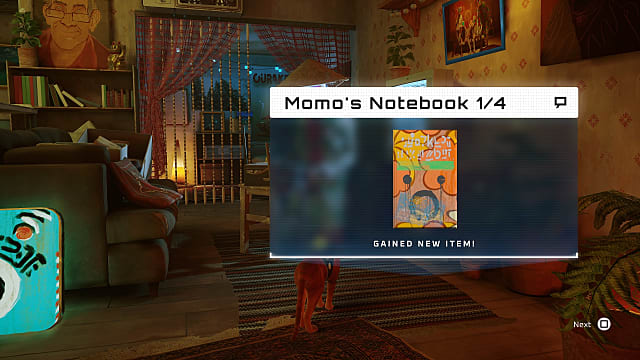 Exit the apartment where you found Zbaltazar's notebook by scratching the green blind in the back of the room. Climb out the window, and go left. Jump over to the Companion robots throwing the paint cans, then climb up to Momo's apartment. There will be a cutscene when you enter before a bit of dialogue. You'll get Momo's notebook automatically.

With Momo's notebook in hand, B12 will suggest showing him the other three notebooks from Clementine, Doc, and Zbaltazar. Show them to Momo in any order. After you show him the last one, he'll become encouraged to fix the transceiver, and you'll be on your way to Chapter 5: Rooftops. Be sure to get the memory in Momo's bedroom and the music sheet from behind the door to the left of the kitchen.