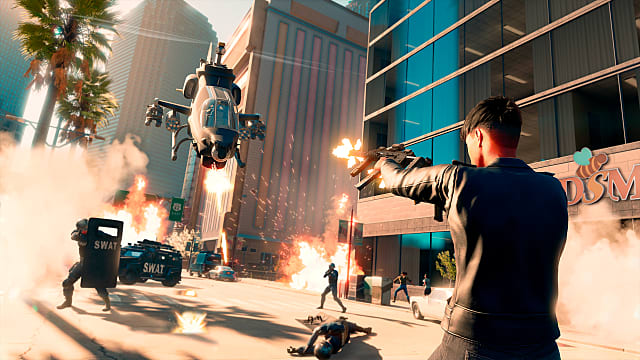 We sat down at a special preview event to play the new Saints Row. Here's why the blend of outrageous action and personable characters left us wanting more.
by Justin Koreis

Everything was going well until that damn train stopped me. My crew and I had just knocked over a Payday Loan joint. I didn't feel bad; those guys are the real crooks anyway. But now we were stuck, and the police were bearing down on us. I hit the gas, but it didn't matter. They were catching up.

As we raced through the winding highways outside of Santo Ileso, I went on the offensive, sideswiping the pursuing cop cars and running them off the road in what I’m sure were very safe fiery explosions.

I tried to switch cars, but another gang had stripped my backup ride, so I parted with my companions and made an off-road escape on a dirtbike. It's a tactic that almost worked — until my path took me right into a police roadblock and some very effective spike strips.

As the fuzz closed in and all seemed lost, my accomplice Neenah showed up in a car, jumped it to the top of a billboard, and brought the giant sign down like a flyswatter onto the bewildered cops below. Splat.

It was a move almost too ridiculous for even a Fast and the Furious movie. It was stunning, absurd, and precisely the tone-setter I needed for my hands-on preview of the upcoming Saints Row. 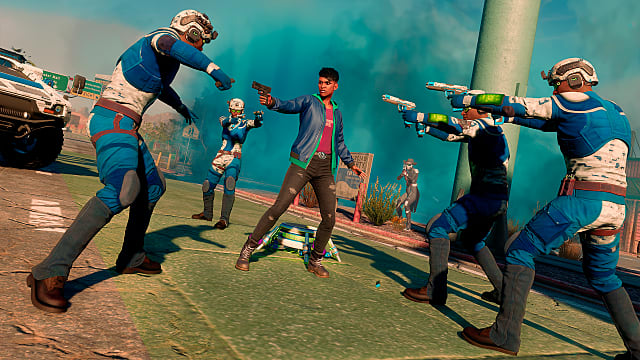 The initial reaction to the Saints Row reboot trailer was lukewarm at best. But it’s hard to get a sense of tone or scope from just a few minutes of video. With that in mind, I was interested in getting my hands on a playable build at a recent preview event in Las Vegas. I wanted to see what this new chapter in the Saints saga was all about.

As I played through the intro — which I won’t spoil — the art style stood out immediately. Things look clean and realistic, but with exaggerated colors and visual pops instead of highly detailed textures. It's a sort of middle ground between the hyper-realism of Grand Theft Auto and the more cartoonish look of Fortnite.

I started in a small apartment with the new Saints, all with their own unique skills and interests that a burgeoning criminal enterprise needs, be it driving, finance, or just good old-fashioned muscle. They are a personable group, especially The Boss, and even in my short time with the game, I found myself invested in the characters as we tried to create a name for ourselves in Santo Ileso.

The main story missions I saw were full of dramatic set pieces, like a high-speed convoy chase or a visit to a rave that ended with me attaching a tow cable from my car to a shipping container and swinging it like a flail to obliterate the fluorescent dune buggies in pursuit. It’s as ridiculous as it sounds and entertaining as hell. 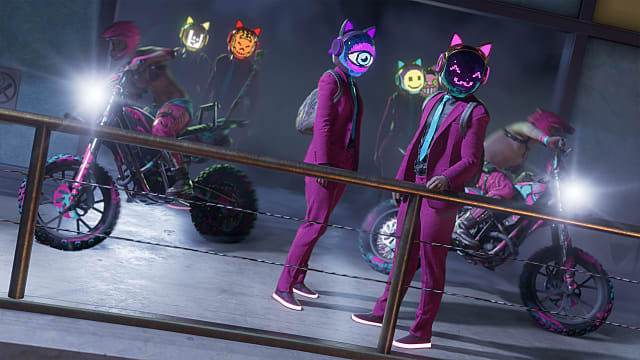 After a few story missions, I decided to see what side quests are available in Saints Row. In short order, I was picking up dropped drug crates, dumpster diving for lost treasure, and stealing things from a helicopter to make extra cash. I bought a nice big machete and sombrero with my ill-earned money, and the vast number of shops around town indicate a lot of variety for your loadouts. At one point, I was leaving a bad review on the in-game version of yelp, which naturally ended in violence.

Shooting guns feels about the same as any third-person action game, and swinging my machete was satisfying. Over time, you build a meter through attacks and kills that lets you execute a takedown animation, instantly eliminating most enemies and refilling your health, similarly rewarding aggressive gameplay like Doom. 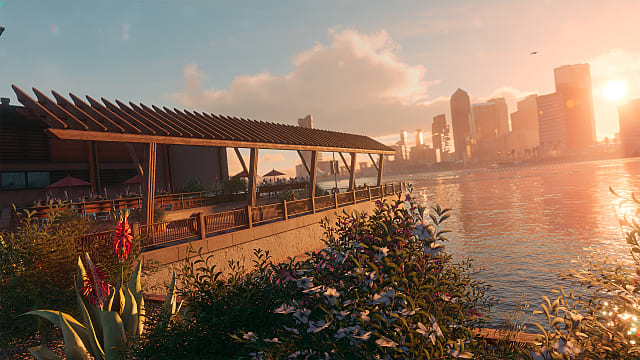 Santo Ileso itself feels very alive. The neighborhoods and districts I drove through were distinct, with cars and people that varied to match the area. Residents milled about, visited shops, and generally behaved in a manner that felt natural. At one point, I found myself just sitting and watching a group light fireworks, basking in the colorful bursts of light.

I couldn’t let the peace last for too long — this is Saints Row, after all. As my playtime neared its end, I did what any person in an open-world game inevitably does; I started creating as much mayhem as humanly possible. I began by crashing into a fuel container truck. I jumped out of my car and filled the massive fuel tank with machine gun fire until it erupted in a very satisfying fireball.

Unsurprisingly, it caught the attention of local law enforcement. The first car deployed a pair of officers. One charged me but met the business ends of my fists. The other didn’t want any part of that action and fled to call in reinforcements. I could have tried to stop them from getting the call through (there is a small meter that fills, indicating the progress of a backup call), but I wanted to see how far things would go. More police arrived, and a high-speed chase ensued when I stole a nearby car. I took out a few cruisers with carefully-timed sideswipes, and my Wanted level increased.

As I sped along to create more chaos, the growing number of pursuers started setting up roadblocks. I decided to fight my way out on foot, using a rocket launcher to clear the SWAT teams trying to box me in with their riot shields. My fight didn’t end until I finally pissed off the authorities enough for them to send in a fully loaded tank, and the machine guns and cannon brought me down in a blaze of glory.

There is a lot to like in what I played of Saints Row. It looks and plays well, and the variety of action and set pieces kept me well entertained. It’s a crowded genre with some heavy hitters. Still, the bombastic action and engaging characters might be just what this reboot needs to stand out and reestablish the Saints as a group to be reckoned with when it releases on August 23, 2022, for PlayStation, Xbox, PC, and Google Stadia.

Justin is a married father of two, has too many pets, and is a life-long gamer. When he's not in the virtual world he specializes in live event production, designing events for corporate clients such as Microsoft and Nintendo.