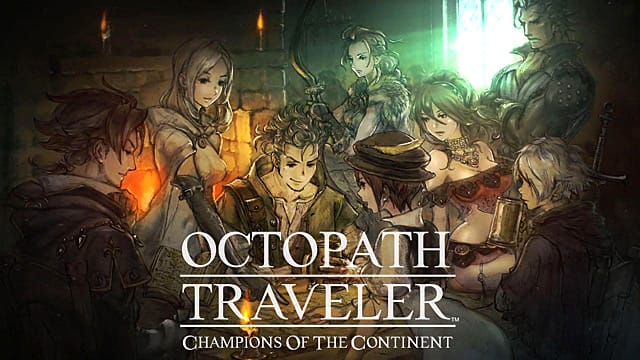 Have a good look at our tier list guide of the best characters in Octopath Traveler: Champions of the Continent for a solid team.
by Sergey_3847

Octopath Traveler: Champions of the Continent, a prequel to the original Octopath Traveler game, has been finally released worldwide on Android and iOS devices after several years of waiting.

This guide will focus on a tier list of the best characters in Octopath Traveler: Champions of the Continent. You will learn all about their best abilities, as well as synergies with other characters.

Fiore is undoubtedly the best physical DPS in the game. You'll want to keep her as healthy as possible, since she gets a 20% sword damage buff while her HP gauge stays full.

Fiore has both excellent single target and AoE attacks, but her best move is Collapse Charge, which not only deals a ton of damage, but also removes any defensive buffs from the enemies.

Pair her up with Sigrid, and you will have the best offensive couple on your team's roster.

Sofia is a scholar and an ice mage with lots of passive buffs. Just like in the case with Fiore, try to keep her HP intact and you'll get a 50% SP bonus.

Her ice magic can also focus on both single targets and large groups, providing solid crowd control. She herself is also resistant to fire and ice elemental damage.

There is good synergy between Sofia and Aslyte, who reduces an enemy's ice defenses, making Sofia's ice magic so much more effective.

Every team needs a solid tank who can absorb lots of damage without any hiccups. Gilderoy definitely fits the description with his fantastic passive ability, which allows him to restore HP automatically once it drops below 90%.

His 5-star active skill allows him to counter any physical attack with his spear, and he also can inflict three consecutive lightning strikes with his Chain Lightning ability that also inflicts Paralysis.

Gilderoy can work wonders alongside Meena and Mabel, who can help debuff enemies, while he strikes them with his power bolts.

Theo is an apothecary, or in simpler terms, a healer. His Full Frontrow regeneration ability not only heals allies, but also restores their stats and SP.

What makes Theo an unusual supporter is the access to the powerful Double Harvest AoE attack. Additionally, he can grant immunity to one of his allies for a short period of time.

Try to pair him up with Bertrand, who can buff his AoE attack even further, making it deal much more damage.

Lynette is another great support character, though unlike Theo she has no healing powers.

Her passive skills automatically boost all physical and magic attacks of her allies by 10%~20%. But what makes her special is the speed at which she performs her buffs.

Of course, she can also debuff enemies, lowering their defenses for a turn or two.

Viola is similar in application to Lynette, but she also has an ability to heal, although not as effectively as Theo.

Her Anti-Attack and Anti-Guard abilities debuff enemies attacks and defenses respectively, while her dagger weapon can be used rather effectively for some unexpected attacks.

Actually, Lynette and Viola can work as partners, using their high speed, and buff/debuff their allies/enemies right before the attack step.

You can also combine them with Helga, who has the ability to reduce the enemy's speed of movement for an even stronger result.

Although ranged characters aren't as powerful as melee DPS or mages, Scarecrow is a good choice for a team that needs at least one bowman.

What makes him such a desired ranged character is his bow AoE special that guarantees critical damage. More than that, his damage increases by 20% if critical hit was successful.

Scarecrow synergizes with Lucetta, who has the ability to reduce the enemy's defensive skills specifically against bow damage.

Those are the best characters in Octopath Traveler: Champions of the Continent. If you found this article useful, be sure to give it a share.