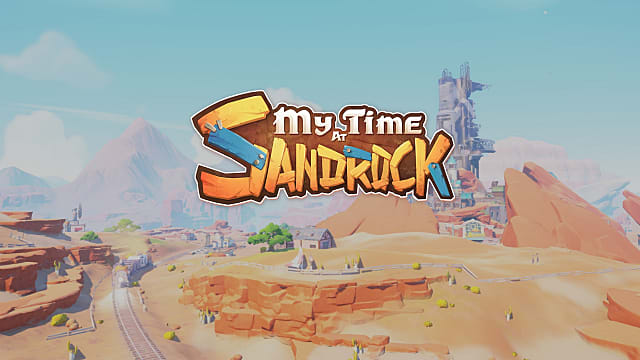 My Time at Sandrock Early Access Review: Grind for Glory

My Time at Sandrock's Early Access phase is charming but needs to cut back on the grind.
by Josh Broadwell

On my first day in Sandrock, a man in a cape swore to defend the town with the power of his chiseled chin, and a yak zealot tried getting me to drink yak milk when we first met. On my second day in Sandrock, I collapsed after running out of stamina while trying to gather enough resources for a simple building project.

If this sounds a lot like My Time at Portia, you’re not wrong. My Time at Sandrock is a follow-up, after all, and in many respects, it's a crafting-centered desert skin stretched over Portia’s venerable bones. It’s got everything you’d expect from a life-sim, from dating and town improvement to item building and even farming, and while it does most of these things very well, it doesn’t really try anything we haven’t seen before.

That’s not necessarily a bad thing, though. Some excessive grinding makes Sandrock a chore at times, but it’s so charming and finely crafted that you can’t help but fall in love.

My Time at Sandrock Early Access Review: Grind for Glory 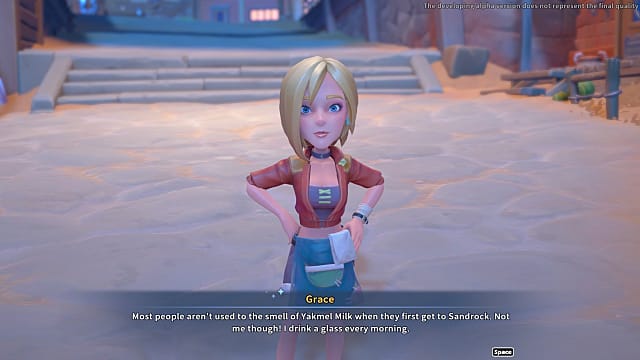 My Time at Sandrock starts with your arrival in the eponymous town, after tailoring your builder to your heart's content with a surprisingly detailed character creator. You're here not to fix up your dear grandad’s old farm, but to take over from the former builder Mason, who seems rather relieved to be putting the desert oasis behind him. It’s not long before you find out why. Yan, the town commissioner, has a tendency to bully builders – and everyone else – into doing whatever he wants, typically without much recompense if he can get away with it.

Still, you’re here and determined to make the best of it, bringing peace – or “telesis,” as one out-of-place instance of the game’s randomly implemented parlance calls it – to the town and its residents. That means taking on their requests and building items ranging from the useful, such as an elevator that lets salvagers reach valuable materials in dangerous places, to the convenient, like an umbrella seat near the local oasis.

It’s a winning formula we’ve seen before, and once you get into a pattern of crafting, socializing, and exploring, it’s incredibly easy to lose yourself in Sandrock. Or it would be if it didn’t keep doing its best to get in the way and make itself a chore. 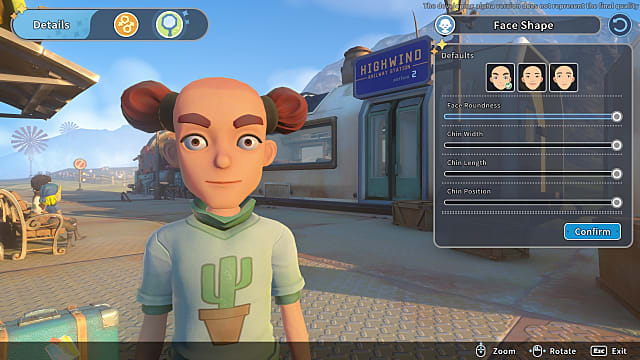 You can do a surprising number of things with Sandrock's character tools, and some things you probably you shouldn't do.

Crafting games always require a certain amount of grinding, but Sandrock takes things a bit too far. Consider your recycler, the only way to get a handful of important materials for main missions in the early game. You’ll need to find the right resources from the right locations to feed it, though there’s a chance during scavenging that you won’t end up with what you want anyways. Then there’s the recycler itself.

Say you’re after four copper sticks. Ideally, you put in four pieces of copper scrap and get the sticks. Instead, it took 15 copper scraps and almost two days of fuel to get what I needed. Fuel is, thankfully, easy to come by, but you also need water to power every machine at your workshop. Later, you can get a dew collector to make water gathering easier, but for a while, you’re stuck getting dew off plants. 10 dew stacks add one percentage point of water to your tank, and you get where this is going.

Done well, these kinds of loops are supremely satisfying and even relaxing, but in its Early Access phase, Sandrock asks a bit too much of you to really be enjoyable in its opening five hours or so — even 12 and 15 hours in don't change things much quite yet. Even after you get better machines and a stockpile of materials, most blueprints require too much time to build and effort – getting copper to smelt into bars to turn into 10 copper screws and so on. 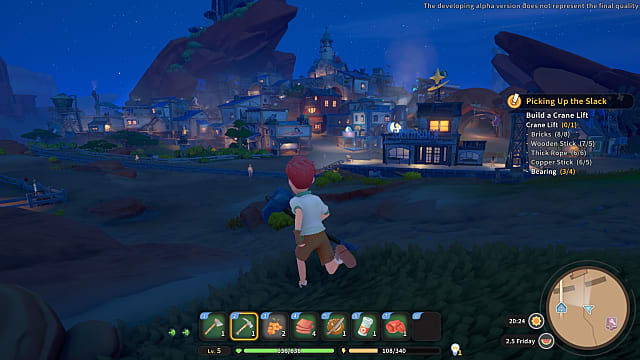 Much of it just feels like busywork right now, though Sandrock is also happy to let you be as not-busy as you want. From what I can tell, no main missions or side missions have time limits, so if you want to take a week to make those copper screws, spending the rest of your time chatting with folks or exploring ruins, you’re free to do it as long as you have the interest and the stamina.

I can’t say any of the characters grabbed me emotionally, but they’re a cheerful, sometimes bizarre, bunch that almost always has something interesting to say. And the ruins you can explore are fine, but nothing as in-depth as Stardew's, for example (that's not to mention how few easily-findable items give any substantial amount of stamina to keep going for too long).

In the end, though, I was happy to keep playing My Time at Sandrock because it has such a strong sense of place, a sense that only grows as your work helps contribute to the town’s growth. Expanding businesses, new conveniences, new features, and a general sense of growing well-being are the fruits of your labor, direct effects of your actions that you often don’t see in similar games.

Considering Sandrock is still in Early Access, I imagine the rougher points will gradually be smoothed out so what makes it charming and enjoyable can shine through even stronger.

[Note: Pathea Games provided the copy of My Time at Sandrock used for this EA review.]

Josh Broadwell started gaming in the early '90s. But it wasn't until 2017 he started writing about them, after finishing two history degrees and deciding a career in academia just wasn't the best way forward. You'll usually find him playing RPGs, strategy games, or platformers, but he's up for almost anything that seems interesting.

My Time at Sandrock Articles
more »