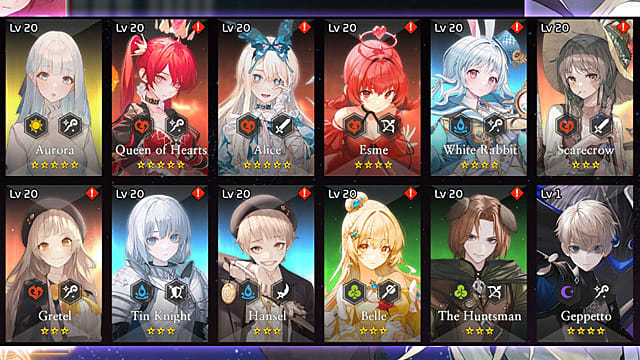 Don't waste your time on subpar heroes in Grimlight! Instead use our tier list guide of the best characters for rerolling.
by Sergey_3847

Grimlight has a surprisingly strong story campaign for a mobile RPG, and a roster of versatile heroes. New players would also be pleased to find out that the line to reroll comes very quickly here.

Our guide will list all the best characters in Grimlight in a tier list fashion, and provide you with clear instructions on how to reroll.

How to Reroll in Grimlight

You've got 10 free starter pulls per account in Grimlight:

In case you are not satisfied with your ten free pulls, and you wish to repeat this process, then you need to create a brand new account under a different email, and after that you can try another 10 free pulls on this new account.

Cinderella has the highest active damage in the game, which is multiplied by 12x, resulting in the total of 6,804 damage. This means that she is a perfect choice for targeting bosses and other strong enemies.

Also, she begins each round with an additional shield, and grants extra energy to all allies.

Since her element is Water, Cinderella would be perfect for teams that focus on this element.

Speaking of Water teams, here is probably the best companion for Cinderella, who uses frost magic to immobilize foes. Two of them, Cinderella and Winter Queen, could easily deal with lots of problematic units during any battle.

Winter Queen can be either a center or a support of a frost-focused team, which is currently one of the best strategies in Grimlight.

You may notice that Alice has the same amount of damage as Cinderella, but her active multiplier is only 3x. Still she can deal a total of 4,252 damage to a single target, which at times is enough to insta-kill an enemy.

She also has a passive healing skill, which restores 170 HP to all allies, and her evasion has a natural boost of 20%.

All this makes Alice a fantastic choice for any Fire team, that is looking for a universal DPS.

Dracula is arguably the best tank in the game due to his immense HP pool and Lifesteal trait, which allows him to heal himself after each attack.

He can be used as a damage dealer as well, but then you would need to pair him up with a buffer, who can regularly boost his attack power.

Dorothy is a straight-up healer who does nothing but restores HP of her allies, and she does it very well.

Her active skill provides all allies with a temporary shield equal to 3,575 HP, which lasts for 10 seconds.

On top of that, she can heal 862 HP of the four nearby allies after dealing three hits.

Snow White is another top-notch tank, who has a humongous HP pool, but what makes her a little less exciting than Dracula is the lack of the self-heal ability.

She can resurrect herself once per battle, but in that case Snow White gets only half of her life back.

If you weren't able to get Alice during your initial pulls, but you did get Queen of Hearts, you still lucked out as she's one of the best Fire DPS units in the game.

What makes her really special is that all her active attacks come in the shape of massive AoEs, although the damage could be higher.

Rapunzel is basically a slightly worse alternative of Dorothy. She basically has the same healing mechanics, but a little less effective.

Rapunzel can heal all her allies for 3, 264 HP, and at the same time remove all debuffs. And, just like Dorothy, she can heal 612 HP of the three nearby allies after every three hits.

Those are the best heroes in Grimlight, for you to reroll for using those free pulls.