A helpful look at navigating the intricacies and nuances to evolving Partner Digimon and Free Digimon in Digimon Survive.
by Joshua Robin

Every Digimon game has a slightly different way for the titular creatures to evolve, so even veterans of the universe will have to adjust to the new system in Digimon Survive.

This game’s focus on player choice not only affects the story, but also how the Digimon evolve. To fully explain the evolution system, requires explaining the Karma and Affinity systems too. 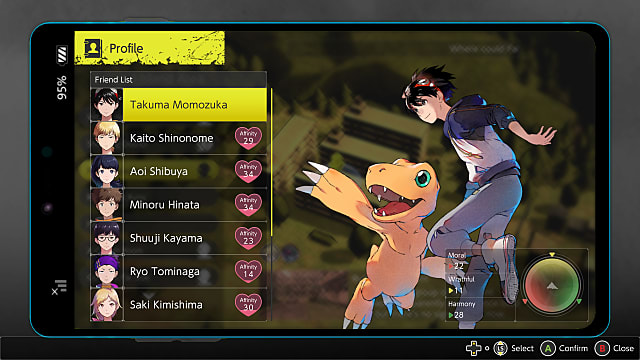 Karma and Affinity are how the game tracks player choices. Karma tracks the way the player likes to handle situations. There are three branches of karma: Wrathful, Harmony, and Moral.

When scenarios arise that impact your Karma, the choice will have three options that are color coded;

Picking one of these over the other will increase the score of that branch by one as well as having small effects on the game’s story.

Affinity tracks who the player spends time with and how much that person enjoyed that time. It isn’t simply enough to spend a number of actions with a specific person; they can easily be frustrated with you instead. However, if Kaito, for example, found spending time with you comforting then your affinity score with him would go up.

Survive separates Digimon into two types: Digimon who appear in the main story and Free Digimon, which are Digimon who join your party from random battles or side events. These separate types of Digimon evolve in different ways. The story Digimon evolutions are affected by Karma and Affinity as well as how far the player has progressed into the story.

My Harmony score has always been the highest of my Karma branches, so my Agumon evolved into the Champion form Tyrannomon then the Ultimate form Triceramon. Players with higher Moral and Wrathful scores will have their Agumon evolve into different forms than mine. 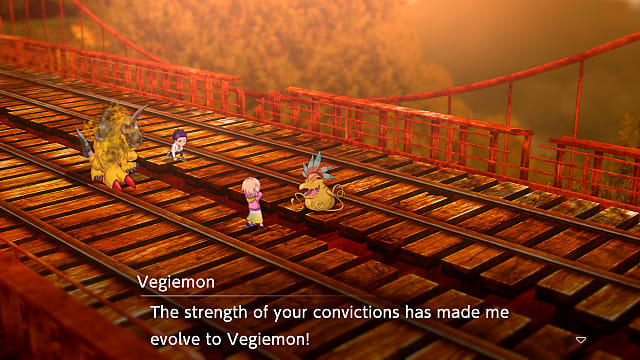 The main cast Digimon’s evolutions are affected by Affinity instead of Karma. Agumon will get access to a tier of Evolution then that evolution tier will become available for the rest of the cast soon after.

Affinity scores come into play only at the Ultimate tier of evolution. Main cast Digimon require an Affinity score of 30 before they can access their Ultimate evolution. Once that score is reached, an area called Deep Woods will open up on the map.

Going to the Deep Woods during an Exploration phase will show a cutscene of a partner pair being attacked. The Digimon will evolve into a new tier and a battle will start with that new form. 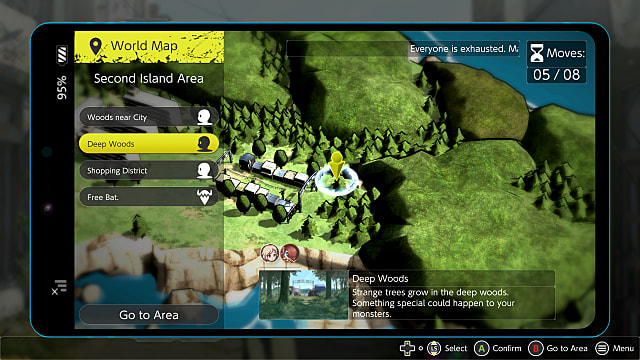 Later evolutionary forms have much more specific factors to access such as a much higher Affinity score requirement, choices made in the story, and possible New Game+ runs.

Unlike the Partner Digimon, Free Digimon are much easier to evolve. They only require an item, Enlightenment Stones. These stones are given to the player through story progress, found during Exploration, received by talking to enemies during battle, or rewards for evolving main cast Digimon.

There are tiers to Enlightenment Stones which correspond to which level of evolutionary line they unlock. As long as you have the correct tier for the Digimon you want to evolve, you can go ahead and evolve them. 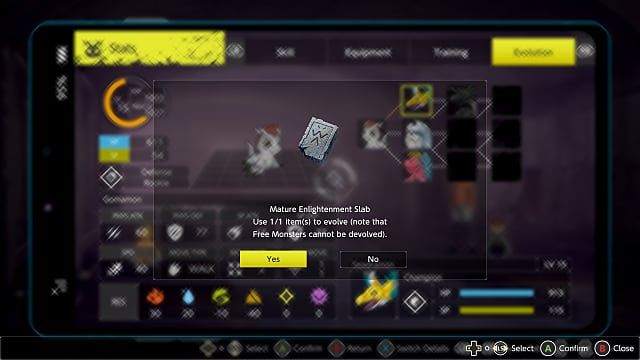 To evolve a Free Digimon, go to the Stats page from the pause menu. Pick the Digimon you want to evolve, and move to their Evolution tab. From that tab you can see what evolutions are available as well as their stats and resistances. Pick the evolution you want and the game will ask you if you want to spend an Enlightenment Stone to evolve them. Click yes and they will evolve.

And that is how to evolve the main cast’s Partner Digimon as well as the Free Digimon found in Digimon Survive. For more guides on Digimon Survive, keep an eye on the game's tips page.