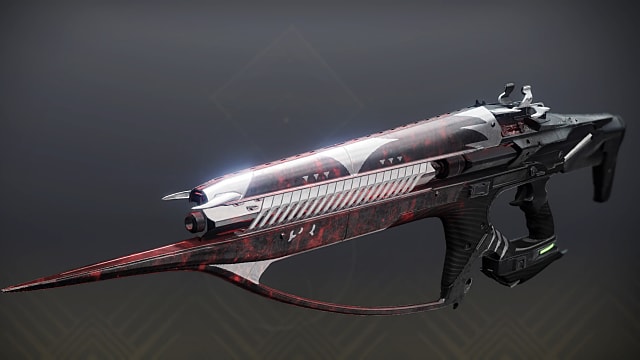 A new DPS king in Destiny 2's Season of the Haunted, Stormchaser is unique to the Duality Dungeon. If you have access, you will want this weapon's god roll.
by John Schutt

Linear Fusion Rifles have been at or near the top of the PvE DPS meta for at least a year, going back to the Threaded Needle from Season of the Chosen at the very latest. With Stormchaser, the Legendary LFR from the Duality Dungeon in Destiny 2’s Season of the Haunted, their reign is all but cemented until Lightfall in early 2023. Arc 3.0 is coming in Season 18, and Stormchaser is an Arc weapon, so there’s no telling how powerful it will become with the Seasonal mods from the artifact.

Even better, there are plenty of god rolls to farm now and into the future. Duality is unlikely to disappear when the other seasonal activities go away come the Lightfall expansion, as Bungie has never removed a Dungeon from the activity rotation. They don’t mind axing Raids or entire planets, but since the introduction of Dungeons with Shattered Throne, none of these three-person endgame activities has gone away when their contextual season did.

Here are the rolls you want to go for when farming for the Stormchaser in Destiny 2.

Stormchaser is a three-round burst Linear Fusion Rifle, and it’s got some serious kick. You’ll want to do whatever you can to mitigate the recoil, so Arrowhead Break should be your first choice. It provides a significant reduction to the Recoil stat and a modest buff to Handling, making it a little easier to swap between it and something like Witherhoard or another supplementary DPS option.

Corkscrew Rifling is a good backup perk, with a small buff to Stability, Handling, and Reload. Not the massive buff to control Arrowhead offers, but all nonetheless worthwhile.

The Battery you want in Stormchaser ultimately depends on how you want the weapon to feel. Liquid Coils — a flat buff to your damage — is almost always a top choice. If you don’t mind seeing a slightly smaller damage number a little more often, Accelerated Coils provides equivalent or even slightly higher DPS than Liquid Coils, but only if you have an optimal damage phase.

Enhanced Battery strikes a middle ground, granting neither speed nor damage, instead adding one extra burst before you need to reload. Paired with something like Rapid Hit, Enhanced could be the best perk of the three.

If you don’t end up with Enhanced Battery, Clown Cartridge can be a saving grace. All you need to do is defeat a single combatant and watch your magazine overfill by up to 50%. That’s up to eight bursts before you need to reload, nine with Enhanced. Damage uptime is essential to getting the most out of a DPS phase, so the more shots you can fire, the more time you spend firing and not reloading.

Rapid Hit almost makes you have an infinite magazine, especially on a boss that stands around. At five stacks, the Stormchaser’s reload takes about a little less than a second, so you can get back on target and kill with almost no downtime.

Most DPS happens as a team, with your friends alongside you. For that reason, Firing Line is far and away the best second trait to farm for. So long as you’re standing with fellow Guardians, you’ll receive a flat 20% damage boost to precision damage. Against stationary targets like Caiatl, Avarokk from Grasp of Avarice, or even Rhulk with the Divinity debuff, there are few better options.

For completing content solo, Vorpal Weapon is a no-brainer. There’s no activation requirement, and though it only offers a 10% damage buff on Stormchaser, as it’s a Heavy weapon, its ease of use makes up for that limitation. Frenzy provides a middle ground, as you’ll need to be “in combat” to activate the perk, but by the time you need to reload, you’ll have easily activated the 15% damage, Handling, and Reload bonus.

Stormchaser is not really a PvP weapon. Its burst-fire mode, lack of controllability, and the Heavy ammo limitations in Crucible make using it in the mode less than ideal. If you want a challenge or like how the weapon looks compared to better choices, here are the rolls you want.

Stormchaser’s charge time isn’t slow, but it’s not particularly fast either. Adding Accelerated Coils will help you start a fight more quickly, invaluable in the faster-paced Crucible engagements. Alternately, Particle Repeater adds Stability, granting both flinch resistance and a little more control to firing the weapon. Both are useful in PvP.

Rangefinder remains a top pick no matter what weapon you’re using, and the Aim Assist it provides is especially desirable, given the high recoil. Well-Rounded’s bonuses to Stability, Handling, and Range are also very good, though if you don’t have a grenade or powered melee ability handy to activate the perk, things are less than ideal.

Stormchaser doesn’t have too many excellent second column perks for PvP, but Vorpal remains a good choice for its extra damage against enemies in their Supers. Sadly, it offers no benefits outside of that situation. Frenzy is solid, provided you can get it to activate, likely only occurring after your first burst.

Provided you have access to the Duality Dungeon, you will want to get at least one Stormchaser god roll during Season of the Haunted. There are so many good options on this weapon that having multiple will allow you to use the gun in various activities and player counts. It’s not great for PvP, but it will melt any boss foolish enough to give you the time to do damage. Check out our other god roll and weapon guides, including Eyasluna, Gjallarhorn, Austringer, and others. Our Destiny 2 guides hub has plenty more.