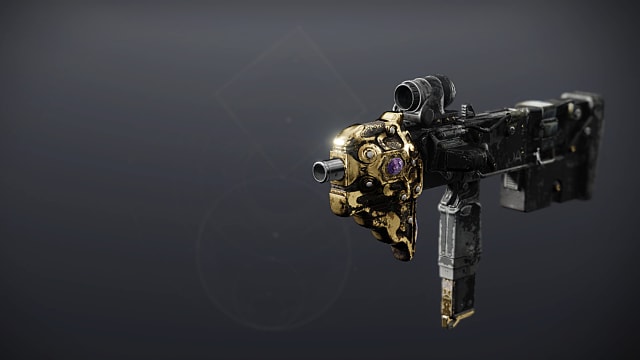 A bullet-hose to end all bullet-hoses, the Calus Mini-Tool god roll will ensure you leave none standing.
by John Schutt

Some of the reintroduced Opulent weapons in Destiny 2's Season of the Haunted are tailor-made for PvP, specifically the Austringer and Beloved. Others, like the Calus Mini-Tool, are PvE powerhouses, capable of taking powerful Solar 3.0 builds and elevating them even further. The weapon is technically usable in PvP but isn't as effective as other, more efficient options.

Your god roll options for the Calus Mini-Tool will focus on maximizing your damage and control of the weapon regardless of the situation. The perk pool on the gun heavily favors PvE, but it is possible to take the Mini-Tool into Crucible with the right build.

Don't expect it to outpace more PvP-focused choices unless you're playing against other un-optimal setups or less skilled players. With Solar 3.0's versatility, there's no doubt you could build into a strong PvP setup, but that's beyond the scope of this god roll guide.

There aren't as many range-increasing options on the Mini-Tool, so your barrel choice is about controlling the weapon's heavy recoil. Arrowhead Break increases Stability and Handling and offers a slight Range boost, as well. Key here is the Stability and Handling; however, even in PvE content, you don't want to suddenly be shooting at the sky or be unable to get the gun ready for a fight quickly.

Corkscrew Rifling is even more focused on control, heavily reducing Recoil and offering additional Handling to go along with it. If you prefer an SMG laser beam, go with this second option.

Where the Calus Mini-Tool's Barrel perks don't offer much in the way of Range buffs, the Magazine is full of them. The first and always best is Ricochet Rounds for a flat boost to your Range stat. This is technically more important for PvP, but increasing a weapon's range in PvE also reduces time-to-kill on more distant mobs, which can be valuable in endgame content if you're taking the Mini-Tool into the toughest activities in the game.

For a more well-rounded bonus, Tactical Mag adds some flinch resistance with a small Stability bonus, an extra bullet in the magazine, and a modest improvement to the weapon's reload speed. All of these are great to have regardless of the content you're doing.

Control and consistency remain our goals when spec-ing out the Calus Mini-Tool, so Moving Target's Aim Assist bonus while aiming down the sights will help you stay on enemy crit spots longer. This is especially useful when doing solo late-game content like high-difficulty Lost Sectors, and solo Dungeon runs.

You want to take out even the orange bar enemies in a single mag dump, and missing any criticals can put a damper on those efforts. If you're all about massive amounts of trash mob control, Grave Robber will keep you topped up so long as you remember to defeat an enemy with melee at least once.

One of the most useful perks for Solar 3.0, bar none, is Incandescent, spreading Scorch stacks to any enemies unfortunate enough to be near the one you just defeated. This applies to Guardian enemies as well, so if you want to take out multiple foes with Ignitions in PvP, it's certainly doable. There are even more ways to Ignite the enemies of humanity in PvE, and there are far more of them on the map at once, letting you chain Ignitions almost endlessly with the right setup.

If pure weapon damage is your goal, Surrounded grants up to 30% additional damage when you're surrounded by multiple enemies. It doesn't have as much immediate utility as Incandescent, but it's a good option either way. Feeding Frenzy is for those who want to keep their Mini-Tool topped up as much as possible while dealing death all around, stacking improved Reload speed up to five times.

Oddly, the Calus Mini-Tool benefits just as much from the PvE perk god rolls in PvP. There aren't many other viable choices that benefit you in the same ways.

You can dump almost half of the Calus Mini-Tools magazine in the 0.6 seconds Tap the Trigger's buff is active, which allows for greatly controlled recoil and improved aim assist. Eye of the Storm has similar effects, but activates as your health gets lower, a likely situation in close close-range fights you'll need to focus on with the weapon equipped. As mentioned in the PvE section, if you build into Ignitions for Crucible, you can do some downright evil things to other players in the right situations.

Those are our Calus Mini-Tool PvE and PvP god roll recommendations. It's a monster against the likes of the Fallen, Hive, and Scorn, but enemy Guardians should fear it as well, provided you build around its strengths. We've covered other Destiny 2 god rolls here, including the Eyasluna, Fatebringer, and others. Check out our guides hub for more.