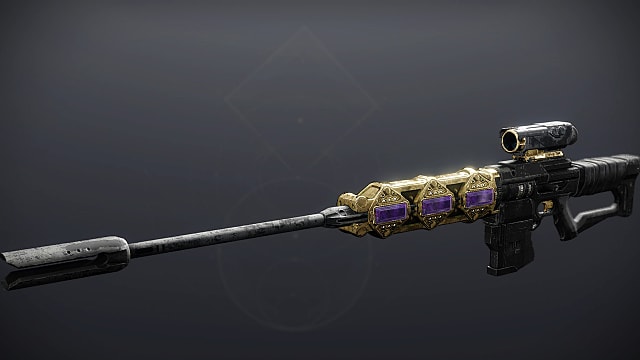 One of the kings is back to claim its crown. The Beloved Sniper Rifle is one of the best options available in Destiny 2's Season of the Haunted. Here's the god roll you should be farming.
by John Schutt

The Beloved Sniper Rifle was a catalyst for not one but two sweeping changes Destiny 2 players disliked: sniper scope adjustments and sunsetting. Before the Beyond Light expansion, it was the most used Sniper in Crucible, and there was no competition. Its low-zoom scope and excellent perk choices put it above everything except the Revoker. It’s now in Season of the Haunted, and you'll be after its god roll.

The Destiny 2 sandbox has changed wildly in a year, but Beloved doesn’t care. It maintains top-tier status in PvP. With the advent of Solar 3.0 and a few new perks, it’s no slouch in PvE content either. We’ll cover all the must-have perks in PvE and PvP right here.

Many of the same rules apply to the Beloved god roll that did when it was first introduced back in Season of Opulence. The best barrel and magazine options are still around, as are traits one and two. PvE has a little more variety, but only a little.

A PvE Sniper Rifle is all about controllability and supplemental burst damage. Beloved can provide both, and while it won’t measure up to a Sniper with Focused Fury or Firing Line, it can still stand beside them confidently.

Fluted Barrel is an excellent secondary choice, as it gives a bit more Handling than Arrowhead and provides a small bonus to Stability. The recent changes to Flinch have made Stability a must when you can find it, so adding Fluted to Beloved is a good option if you want to be a bit more active on the battlefield.

There are few weapons not improved by Ricochet Rounds thanks to its minor increase to range and a more significant boost to stability. The same is true for Beloved. Alloy Magazine keeps your Beloved topped up even if you exhaust all its ammo.

There’s almost no situation where being able to aim down your sights faster isn’t a good thing. It’s not as optimal in PvE and PvP, but if you play the aggressive sniper against the enemies of humanity, having Snapshot decrease your ADS time by a quarter is a great boon.

No Distractions is a better option if you plan to hold down a sightline or aim at a boss or other enemy’s weak spot. With No Distractions active, your resistance to flinch increases by a whopping 35%, keeping you on target and your damage consistent.

Solar 3.0 added the Scorch and Ignition states, applicable across PvE and PvP. As the community discovers new Solar builds, there are more and more ways to activate ignition explosions, and Incandescent makes the job easier by igniting any enemy killed by Beloved and spreading Scorch stacks to nearby enemies.

Quickdraw is, again, for the more active PvE sniper who wants a good ready time on their Beloved however they can get it.

Sniping in PvP has historically been about who’s quickest on the draw, whether for a quickscope in close Range or the flick down a sightline. Beloved doesn’t perform much differently between PvE and PvP, so the perk choices tend to translate between them.

The same choices as PvE for the same reasons.

Ricochet rounds are the choice for the same reason as they are in PvE, but the pick of High-Caliber Rounds is for the increased flinch. Enemy players who took the time to level Resilience won’t feel as much of the effect, but even those with maximum flinch resistance will see the effects of High-Cal and could win you an otherwise impossible fight.

The same as PvE. No Distractions, in this case, is for holding down sightlines and still being ready to fire if you take some incoming shots of your own. Don’t hang around too long, but you ought to be able to take at least a few primary hits before you have to bail.

Quickdraw in PvP is even more useful for the same reasons, but if you want some extra lethality while holding down a lane, Moving Target’s Aim Assist and minor movement speed buff while ADS’d come in very handy.

Any combination of the above perks will make for a very well-performing Beloved. Destiny 2’s Season of the Haunted didn’t come out of the gate super hot, but players are getting their hands on the good stuff now. We’ve covered plenty about Destiny 2 during the Witch Queen expansion year, including where to find Lucent Moths, how to complete the Vow of the Disciple Raid, and more. Check out our guides hub for all of it.