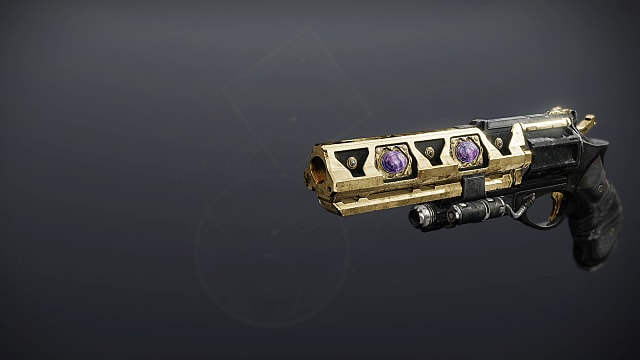 The Austringer is back in Destiny 2's Season of the Haunted, and it has a few new tricks up its already amazing sleeve. Find out the god rolls for this Legendary Hand Cannon here.
by John Schutt

Austringer is craftable, meaning the new Austringer is once again one of the best Hand Cannons in the game for whatever you need it to do. Here's how to get the most out of this storied weapon, now back to reclaim its glory.

Rolls on the Austringer will vary somewhat between PvE and PvP, and the weapon's perk pool makes it valuable in both. Hand Cannons have always been a bit of a catch-all weapon class, good at many things but the best at only a few. Austringer is at the top of its class in that regard, but it can even hang with kings with the right perks.

Range remains one of, if not the, most valuable stats for a Hand Cannon. It increases the damage falloff distance and adds bullet magnetism, making headshots easier to land. Corkscrew is a good compromise, or if you want to have a more well-rounded gun. Corkscrew adds a small amount of Range, Stability, and Handling, making the Austringer an all-around better gun instead of focusing on one stat at a time.

Range and Stability are key for a Hand Cannon. Stability increases flinch resistance and stacks with your Resilience stat. Enough of it, and flinch isn't nearly the demon it was in past seasons.

Ricochet Rounds adds both Range and Stability, and few other perks offer as much. High-Caliber Rounds add flinch to the Austringer's shots, so you'll have a distinct advantage if your opponents haven't put as much effort into mitigating it.

Weapon uptime is paramount in PvE content, and few Traits offer as much utility in that regard as Outlaw, which is a massive flat bonus to your Reload Speed on a critical hit kill. Eye of the Storm makes the Austringer easier to control as your health gets lower, making getting out of a hairy situation more likely.

Rampage's flat damage boost got a modest nerf a few expansions ago, but it remains one of the best Traits in PvE despite it. Stack it three times, and the Austringer will hit like a truck.

Frenzy isn't as easy to activate as Rampage or Demolitionist, but the flat 20% damage buff and a significant bonus to both Handling and Reload speed while active. Demolitionist is all about improving Austringer's performance when using grenades, and some Warlock and Hunter builds are all about that.

Hand Cannons in PvP are all about controlling the weapon and maximizing either Range or damage, preferably both. Austringer doesn't have access to Kill Clip or other on-command damage perks, but Rampage does exist if you can keep it active. Our recommendations focus on making the gun tap heads from as far as possible.

You're looking for the same perks as the PvE roll.

These are the same as your PvE roll, again.

Eye of the Storm can win you fights in PvP that you have no right winning but can leave you vulnerable if you can't regain your health quickly after the engagement. Snapshot Sights is an excellent secondary option as you may get on target that extra half-second faster than your enemy, putting you at an early advantage.

Rangefinder is a massive buff to Range and a minor one to zoom and projectile speed as long as you aim down the sights. Opening Shot isn't the monster it once was, but if you can't yet craft the Austringer and can't find one with Rangefinder, the bonus you receive during the first shot of an engagement can put you at an early advantage.

As one of the best Legendary Hand Cannons to grace Destiny 2, the Austringer's return is a welcome one, even in a busy landscape of them. These rolls will put you in a good position throughout Season of the Haunted and beyond. We've covered plenty of Destiny 2 content throughout the Witch Queen expansion year, including how to activate Void Suppression, how to complete the Vow of the Disciple Raid, and more. Check out our guides hub for all of it.