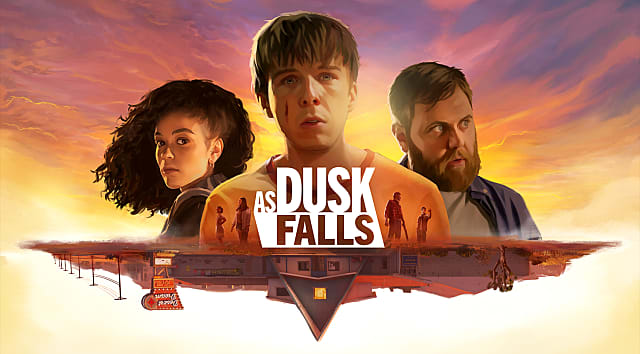 As Dusk Falls Review: You Can Run On for a Long Time

As Dusk Falls is gripping from start to finish and has a lot to say, becoming one of the few games where your choices actually can upend the story.
by Peter Hunt Szpytek

While video games are the perfect medium for "choose your own adventure" storytelling, the genre is still largely unexplored when compared to others. Studios like Supermassive, Telltale (RIP,) and Quantic Dream release genre titles every few years, but those looking for more after playing through their greatest hits are often left wanting.

As Dusk Falls is the next big interactive narrative that will be the talk of Twitter and gaming forums long after everyone reaches its conclusion for the first time. It's gripping, it's heartfelt, and it's a game that holds up well when replayed, something few others in the genre do well.

Where other games of its kind have striven to render realistic character models to convey emotion and fidelity, Dusk Falls opts for a more artistic style, showcasing its story through still images resembling paintings more than anything else. At the same time, the presentation seems to be hit or miss for some, As Dusk Falls is an unforgettable American crime drama that had me on edge from open to close.

As Dusk Falls Review: You Can Run On for a Long Time

The elephant in the room is the art style. Though it screenshots well, I wasn't convinced pre-release that it would be a style capable of carrying the game. Within the first hour or so, I found that to be mostly true: its painterly stills are composed nicely, but they initially create a disconnect between the script and what's happening on-screen. Because characters quick-fade into new positions instead of moving in full motion, the action has a slower pace than the script.

However, that feeling doesn't linger for long because of the performances and writing. By the end of the game, I had grown to appreciate how As Dusk Falls puts its talent and stellar writing center stage, unencumbered by any attempts to achieve artistic realism over style. As Dusk Falls delivers an experience that feels like it's learned from other genre giants, and does so while also achieving something completely original that won't become easily outdated. 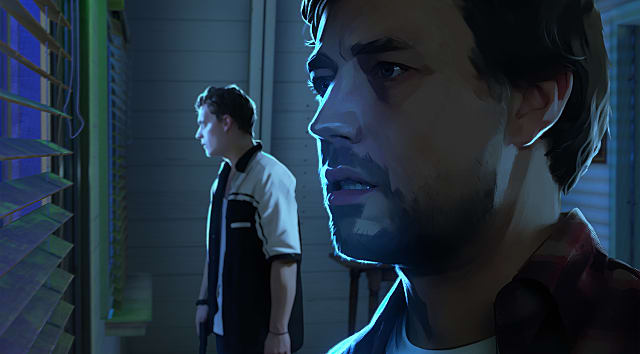 It's lucky that As Dusk Falls has such top-of-the-line writing, too. Perhaps in the hands of a lesser dev team, it could have been a total snooze-fest of an actual game. There's really not much to in terms of game mechanics; 90% of what you do is simply choosing what dialog to say almost every time your character is queued to speak. The other 10% consists of quick time events and scanning a room with a cursor to find objects and examine them closer, all done entirely through cutscenes.

Moving the cursor with a controller feels as good as it ever has — which is to say it's pretty awful. But that's not a dealbreaker since you can highlight conversation options and interactable items with the directional pad. There's also a real-world smartphone companion app that can be used to make decisions and control the game, but it wasn't available to me while reviewing. Considering how barebones the gameplay systems are, the app seems like a decent way to play as long as it's responsive.

Because As Dusk Falls is so mechanically light, its story must do the heavy lifting. There, it delivers a genuinely gripping narrative that tackles complicated themes, such as what drives people into crime and how the police contribute to that cycle, how relationships push people to help each other or push them apart, and what it means to be a family.

On the surface, it might seem like As Dusk Falls bites off far more than it can chew, but despite its serious subject matter, it handles its themes tastefully and never feels like a total bummer to play. It can be absolutely stressful, but I never felt that turning it on would be a chore. Instead, I was excited to see where the story went next. 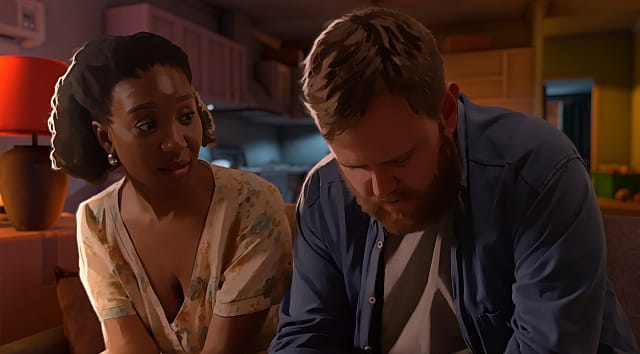 As Dusk Falls is broken into six chapters, and the first three have you switching between two perspectives during a hostage situation: one as a hostage and the other as the youngest brother in a band of outlaws. It's tense and tightly written, and the flashback scenes add additional context to why the events have shaken out the way they have.

The second half, unfortunately, is a little more haphazard. Perspective shifts more as the characters deal with the fallout of the situation at hand, so much so that the character I thought was the main character for the first four hours left the story pretty unceremoniously in favor of others in the cast.

With that in mind, there are plenty of twists in the latter half. While some feel earned, others feel superfluous, as if the writers needed to invent reasons for some characters to stick around instead of letting the cast diminish organically.

The pacing slows, and the tension essentially evaporates as the game shifts from navigating an impossible situation as a captive and captor to being on the run. That said, by the time I reached that point, I was heavily invested in the outcome of my journey. 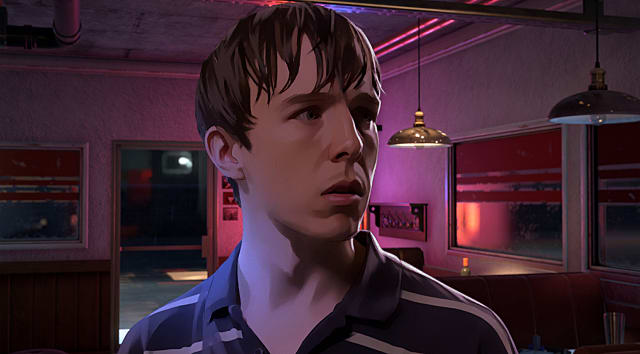 And I say "my" journey because As Dusk Falls features an impressive branching narrative that forms itself around choice. Many games in the interactive narrative genre say that your choices really matter but only give the illusion of that. As Dusk Falls, however, keeps you following a set story before drastically changing scenes based on what you choose.

At the end of each chapter, you're shown a map highlighting your path through the story. It's relatively big initially, but as the game's six to eight hours move along, the paths branch off more and more, to the point where recreating the same run twice seems nearly impossible.

(Because of my limited time with the game, I've only completed a full playthrough and a half, stopping just after the end of Chapter 3 a second time. But I can already count numerous story beats and outcomes that are completely different this time around based on my choices.)

The magic of As Dusk Fades is that it makes each playthrough feel like the proper way that the story was meant to play out. Both of my playthroughs have felt like curated stories that were the "intended" routes through the narrative, which is much more than I can say about my feelings after completing Until Dawn or The Quarry.

On top of that, if you're looking to replay specific moments to see the outcomes of different choices, you can easily do that through the story tree, which has several different places from which you can start in each completed chapter. From there, you can "explore" the different options given to you without making a new save file, or you can copy the events leading up to that point to a new file to pave a new path.

It's the type of mechanic that's essential to enjoying a replay of a game like this that I now won't be able to live without in other narrative-based titles. 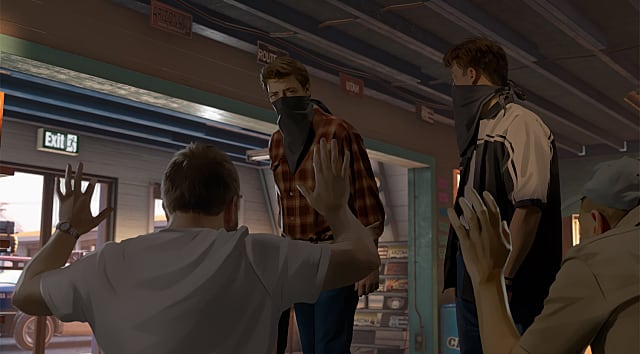 There are so many layers that I'll be unpacking for the next several weeks as I wrap on my second playthrough. I likely won't be the only one exploring everything that As Dusk Falls has to offer. It's a stellar entry in the interactive narrative genre that will only be exceeded by what its dev team has planned next.

[Note: Xbox Game Studios provided the copy of As Dusk Falls used for this review.]

Our Rating
9
As Dusk Falls is gripping from start to finish and has a lot to say, becoming one of the few games where your choices actually can upend the story.
Reviewed On: Series X
What Our Ratings Mean

If you're looking for him, Peter can usually be found dropping hot in Apex Legends with his friends. A fan of games of all types including JRPGs, third-person shooters and survival horror, Peter is a journalism graduate of North Central College and can be found writing for IGN, Digital Trends, and Gameranx, in addition to his work here at GameSkinny. Contact: peter.szpytek@gmail.com. Twitter: @PeterSpittech